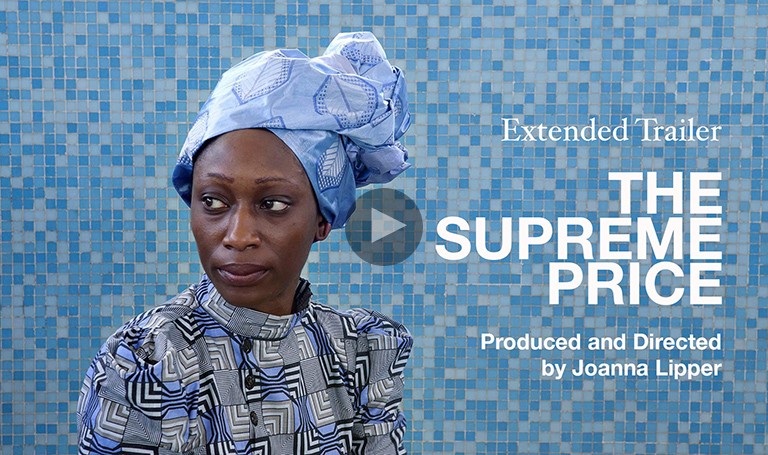 The Supreme Price is a feature length documentary film that traces the evolution of the Pro-Democracy Movement in Nigeria and efforts to increase the participation of women in leadership roles. Following the annulment of her father's victory in Nigeria's Presidential Election and her mother's assassination by agents of the military dictatorship, Hafsat Abiola faces the challenge of transforming a corrupt culture of governance into a democracy capable of serving Nigeria's most marginalized population: women.

"Taking a long historical view of a troubled country struggling to emerge from a military dictatorship is Joanna Lipper’s documentary “The Supreme Price,” about Nigeria’s female-directed democracy movement. After a military coup in 1993, M. K.O Abiola, a pro-democracy leader who was considered the victor in aborted  presidential elections that year but never took office, was imprisoned in 1994. Four years later he died under suspicious circumstances. After his imprisonment, his fearless, eloquent wife, Kudirat, took over the movement’s leadership, but she was assassinated in 1996. The history is told through the eyes of their daughter Hafsat Abiola, a Harvard-educated crusader for human rights and democracy who now leads a movement to dismantle the country’s patriarchal structure.”  - The New York Times

"African Cinema: Top Five Political Films - The Supreme Price...combines daring reporting with behind the scenes access and dramatic archive footage through some of the country’s most unstable periods. A fascinating history lesson of a nation still struggling to emerge from military rule." - The Guardian

"Ms Lipper has used previously unseen archive footage to great effect with the story moving effortlessly between past and present, talking heads and footage from the campaign trail, personal moments and public opinions. There are moments of terrible sadness... But Ms Lipper just as deftly includes moments of surreal comic horror... The themes are heavy: murder and injustice, in a country ravaged by oil money and military rule. It hardly sounds like a recipe for an uplifting film, but Ms Lipper has been careful to ensure that the story is more about going forward than dwelling on the tragedy of the past... it is surely a good thing that a film like this now exists, touching on the issues the kidnappings brought to life and showing how important women are to a country like Nigeria and why it is in everyone’s interest to listen to them." - The Economist

"'The Supreme Price' is a Door to Africa's Recent History." - The New York Times

"The Supreme Price may sound like a metaphorical title, but after seeing this strong, forthright documentary, you'll understand it's the literal truth." -Los Angeles Times

"Patriarchy rules, and yet, according to Lipper's lively documentary, the robust movement for political and social reform is driven by women which is both remarkable and to be expected in a society where women are schooled in submission and excluded from public life."  - Variety

"Excellent...  Lean, lucid... No hashtag activist, Lipper does an excellent job of using her film as a vehicle for the voices and concerns of Nigerians, and especially of Nigerian women, who are traditionally expected to stay at home while men operate in the public sphere."  -Village Voice & LA Weekly Critics Pick

"In her latest film, Joanna Lipper dives into the crucial fight to educate women on a local and global scale....  Lipper presents a comprehensive look at a complex history and masterfully weaves an evocative story of politics, justice and women’s rights that will undoubtedly resonate with viewers worldwide just as the April 2014 schoolgirls abduction has." - BET

"The Supreme Price is a deeply profound and beautiful experience, and an integral film to watch.”  - Indiewire

"A critically acclaimed new documentary, The Supreme Price, tells the story of the Abiola family, which battled for gender equality and democracy in a nation where both have been repressed for decades."  -The Independent

The Huffington Post cites Joanna Lipper as one of the "finest and noblest" documentary filmmakers this year for her work on The Supreme Price. She "certainly succeeds with this one, catching a crucial moment in that explosive country where 200 girls have been lost, at best."

"Some of the best documentaries tell inspiring stories of people overcoming the unthinkable...  With an uptick in kidnappings and killings, the situation in Nigeria is looking bleak. How exactly did the country get to such a state? Joanna Lipper’s film looks at the pro-democracy movement in the corrupt African nation but also gives a helpful tutorial on Nigerian politics.” – The Washington Post

"Filled with intrigue, tragedy and hope, The Supreme Price highlights the close link between the West African regional power’s democratic development and the daily struggles of its women and girls....  One important facet of The Supreme Price is that its story is told from a woman’s point of view. A man’s perspective, no matter how skillfully made and however well researched and intentioned, would have been unlikely to have the same impact....  Alongside her roles as a filmmaker, author and photographer, Lipper also lectures at Harvard University, teaching a course on ‘Using Film for Social Change’. The Supreme Price, it seems, puts the principles she teaches into practice. " — Screen Africa

"Director Joanna Lipper beautifully depicts the epic rise and controversial fall of the Abiolas, while uncovering the corrupt political and capitalist forces which lead to their untimely end…. Superbly shot and stirringly told...a beautiful thing to behold." - StageBuddy

“...Nigeria’s history is fleshed out in a new documentary called The Supreme Price. It’s a fascinating history lesson about the country and gives a compelling account of how Moshood Abiola’s senior wife, Kudirat Abiola, and their daughter, Hafsat Abiola, risked their lives to reinstate Abiola and fight for the pro-democracy movement in modern-day Nigeria.” - The Root

"The Supreme Price Premieres in Lagos.... The documentary by Joanna Lipper is an unprecedented and personal look at the Abiola story." -Nigerian Tribune

"The Supreme Price is one of ten films all human rights activists should see.” - Huffington Post

For up-to-date press and reviews, visit THE SUPREME PRICE on Facebook

Vist the film's facebook page for complete info on previous and upcoming screenings around the world.

JOIN THE CHIME FOR CHANGE MOVEMENT!